The Adventures of Tintin wins The Golden Globe 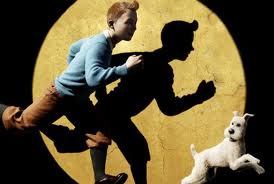 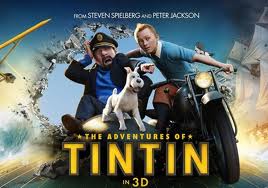 The Adventures of Tintin won the Golden Globe for Best Animated Feature Film at the 2012 Golden Globe Awards last week. It was the first non-Pixar film to win the award.
At last year’s Comic Con, the large comic book festival in NYC, I was surprised to see a  booth devoted to Tintin. I had to check if this was the same Tintin that I knew. I was first introduced to Tintin in a French class.  He was a character created by Herge´, a Belgian comic book artist. We were required to practice our French by reading books including children's stories and easy readers. I was curious when I found the works of Herge´ in the college library. They were hard covered comic books recounting the adventures of a young fifteen-year-old reporter who can best be described as a young Indiana Jones.  Herge´’s stories were influenced by national geographic and the intrigues of World War I.  I enjoyed following Tintin’s adventures although I later found out some of the stories had included many of the racial stereotypes that were prevalent at that time. One book in particular, Tintin in the Congo has been deemed racist and controversial. In some countries it has been banned or labeled inappropriate for children. Herge´ later admitted there was a problem with his earlier works and with maturity he would have handled the stories differently.
Tintin was never popular in the US but in Europe he was well loved. In 1983, Steven Spielberg was introduced to Tintin and contacted Herge´ to obtain the film rights.
Flash forward almost thirty years and The Adventures of Tintin has finally hit the screen. This was a story that had been put on the back burner for so long that fans of Herge´ thought it would never be made but as Spielberg explains, the timing was right today with a new technology that makes the characters look almost real. Spielberg has woven several of Herge’s stories together to introduce Tintin to a new generation.  The Tintin, he has presented is sanitized without the racial stereotypes that marred some of the books. However, there are other parts of the story that have not been cleaned up like Captain Haddock, Tintin’s confidant who has a drinking problem. His condition is handled in a humorous way on screen and later he is able to vindicate himself.
The new version of The Adventures of Tintin is a story of intrigue and redemption.  Spielberg has tried to bring to the screen that part of Tintin that was loved for generations.  For young people who do not have any historical references Tintin is a brand new character that is both likeable and exciting. Everyone loves mystery, intrigue and swashbuckling adventure. New technology also makes the characters so life-like that it is amazing to watch.  But can Tintin be redeemed from the mistakes of his creator to become a modern day heroic figure?  Other characters have been able to rise above their flawed past but only time will tell.

Posted by Children's Focus at 12:30 AM No comments: