How to Dance Salsa


How to Dance Salsa with Baila Society from Alvin Ailey on Vimeo.

It's summer time, and are you ready to move! Alvin Ailey tries to help you get your Latin grove on with a little help from Baila Society.
Posted by Children's Focus at 10:51 AM No comments: 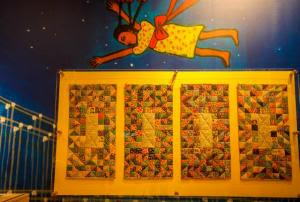 For centuries, children’s books have introduced young people to the art of storytelling and sparked their imaginations. Now a new exhibition, The ABC of It: Why Children’s Books Matter at The New York Public Library explores children’s literature and its crucial role in educating and entertaining readers of all ages while shaping and chronicling society and culture. The exhibition reminds us not only that each generation has their own favorite books that speaks to them but also the story of children’s books has a fascinating history.

More than 250 items from the Library’s collections will help explore the history and impact of children’s literature, and for some this will be a trip down memory lane. The curator, Leonard S. Marcus tries to connect the dotes between the different ideologies that have coexisted in the realm of children's literature from the romantic vision of allowing children to explore their imagination to the more practical view of providing a message to encourage children to be better citizens of the planet. Many of the New York Public Library’s treasures will be showcased: the copy of Alice’s Adventures in Wonderland that belonged to Alice Liddell, the child for whom Lewis Carroll wrote it; a rare 1666 illustrated children’s edition of Aesop’s fables that survived the Great Fire of London; Nathaniel Hawthorne’s family copy of Mother Goose, with annotations stating some passages were too scary to read to their children; the manuscript of Frances Hodgson Burnett’s The Secret Garden; Mary Poppins author P. L. Travers’s parrot-head umbrella; recordings of E.B. White reading excerpts of Charlotte’s Web;  the original Winnie-the-Pooh stuffed animals; comics; copies of The Little Golden Book series (remember The Poky Little Puppy) and an array of other children's favorites.

Find out why children's books matter and other important questions in this new exhibition which, will run from June 21, 2013 until March 23, 2014 at the Library’s Stephen A. Schwarzman Building on Fifth Avenue and 42nd Street.  for more information visit their website.
Posted by Children's Focus at 10:47 AM No comments: