Watch Growing Hope Against Hunger - Preview on PBS. See more from pbs.
Finding ways to alleviate hunger and provide proper nutrition to young people has become a major issue in this country, particularly, since the economic downturn. Last October, Sesame Street introduced a character to address some of the issues of hunger through a child’s point of view. Lily, a new character whose family is having economic problems was introduced to children. Her character was an opportunity for young people to develop empathy toward those in need, and for those who are experiencing hunger to realize there is hope.  Months of research, interviews with parents and children and character development went into creating Lily.  Lily will not be a full time member of Sesame Street but will appear on the website to address issues. In the special, “Growing Hope Against Hunger,”  shown last year Lily along with Elmo, and Brad and Kimberly Paisley discusses solutions like community projects and urban gardening.  Sesame Street is using their site to provide information for families on making it through stressful times.  Now families can meet Lily, and discuss their concerns.

Posted by Children's Focus at 6:00 AM No comments:

New York City Transit seems an unlikely patron of the arts but for years they have supported various art and musical projects Think about all the musicians who perform underground and the art work and murals gracing the walls and tiles of the subway going as far back as the Great Depression.

For their latest project, The Metropolitan Transit Authority's Arts for Transit program has commissioned children's book illustrators Sophie Blackall and R. Gregory Christie to each create a poster for the Big Apple's subway cars.  Each artist created his or her own story and vision to enhance the experience of New Yorkers’ underground experience. Now families can enjoy colorful banners with “rainbow-hued musicians, fish, and a cornucopia of straphangers” as they trek through The Big Apple.” Gregory Christie, the recipient of three Coretta Scott King Illustrator Awards is also a subway rider. “"I wanted to create something adults, kids and teens would be interested in looking at, but would be modern and striking in a gray under dwelling."
Sophie Blackball was inspired by the sketchbooks she has filled riding the subway over the years to create a poster that features 30 New Yorkers, including two Muslim students, a fisherman, a Hassidic man, and even her own children - with her son carrying a skateboard and sporting a blue helmet, and her daughter decked out in bright yellow tights. "This was one of my dream jobs, apart from a New Yorker cover."
Now everyone can enjoy their work as you travel underground in the city, and if inspired can buy a copy of the posters at http://www.mta.info/mta/aft/posters/artcards.html
Posted by Children's Focus at 7:25 AM No comments: 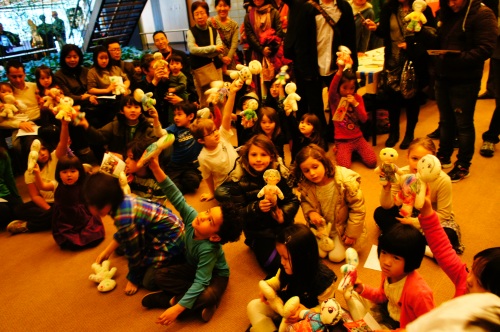 To commemorate the one-year anniversary of the Great East Japan Earthquake and Tsunami, the Japan Society provided children with the opportunity to design HappyDolls for Tohoku.  Over 50 children designed and created HappyDolls and messages to send to the children in Tohoku.
Posted by Children's Focus at 6:03 AM No comments:

The Lorax - A Movie with a Message

I always wonder why every sci-fi movie except for the Jetsons depicts the future as bleak and scary? Can’t humans create a world where peace and harmony with each other and the environment is possible? Maybe, we need a constant reminder that caring for our planet is important.  Movies like The Lorax provide that gentle reminder. Do we really want to wake up in a town like Thneedville where everything is colorful and plastic but fresh air is sold in bottles? 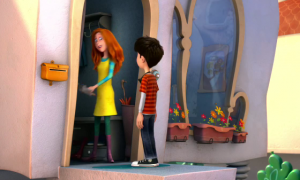 Everyone in Thneedville seems quite satisfied with their artificial world until one day, a young lady named Audrey decides she would love to see a real tree. Ted, her twelve-year-old admirer is not quite sure what a tree is but he is determined to grant her wish. Thus sets in motion this Dr. Seuss adventure where colorful gold fish sing, trees look like cotton candy and lots of cuddly creatures roam. Along the way we meet the Lorax, guardian of the trees, a misguided entrepreneur, corporate greed in the form of a financial wiz and a feisty grandmother.


Of course, there are lessons to learn in a Dr. Seuss sort of way with plenty of music and rhyme. Children will feel like they have jumped into a Dr. Seuss’ book, which comes alive in 3-D with all the color and characters of his special world. The Lorax will spark lots of questions and conversation so after the movie; the book, The Lorax by Dr. Seuss first written in 1971 is still available to continue the adventure.
Posted by Children's Focus at 9:27 AM No comments: