FAO Schwarz Opens in Time for the Holiday Season! 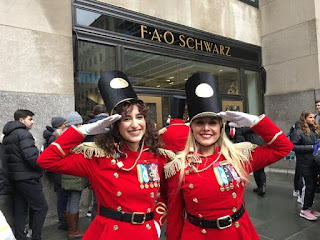 The Tree is here, the star is up—and the new FAO Schwarz has landed at Rockefeller Center! Opening today, the beloved toy store is relaunching on the Plaza with a mix of larger-than-life classics (the room-sized piano keyboard to dance on) and new attractions, like FAO Raceway, where you can build your own custom remote-control car.

A Build-a-Bear workshop, a Transformers shop and a Melissa & Doug grocery store are some of the interactive destinations inside the 20,000-sq.-ft. arrival, and FAO Schwarz is the in-house candyland, chock full of massive treats and even make-your-own gummy worm kits. Plush animals, dolls and other charming, no-assembly-required playthings also abound throughout the space, which expands across two floors and a mezzanine level.

The familiar clock tower of FAO Schwarz, whose longtime Midtown location closed in 2015, welcomes guests at the 49th Street entrance, while a rocket ship makes its first launch, inviting those entering from the Plaza to blast off. And toy soldiers stationed outside the store, dressed in a uniform designed by model Gigi Hadid, bring an extra splash of color and pizzazz.

FAO Schwarz is located at 30 Rockefeller Center (on 49th Street at Rockefeller Plaza, between Fifth and Sixth Avenues), open Monday–Saturday 9am–8pm, Sunday 11am–8pm. Hours will be extended during the holiday season.

Posted by Children's Focus at 11:33 AM No comments: