Each Thanksgiving I try to provide a project that connects the children in the family with a deeper meaning of giving thanks.  This year I liked Daily Candy's Gratitude Jar and the Thankful tree by Simply Vintage Girl.  I liked both their ideas and I think we will probably extend them beyond the holidays.    Thanksgiving and Gratitude show be celebrated every day.

"The Carousel That Could" Symbolizes the Spirit of New York 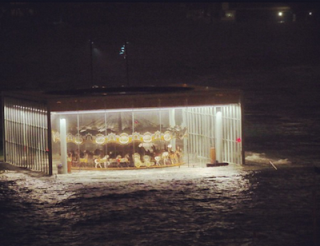 One year after its’ installation Jane’s Carousel was becoming the landmark for children at the Bridge Park on the Brooklyn waterfront. Then Sandy sweep through bringing fear that the three million dollar installation would not weather the storm but, fortunately, this carousel has had a history of endurance.

The carousel was built in 1922 to bring joy and delight to children at Idora Park in Youngstown, Ohio. When a fire consumed the park in the 1970s,  the carousel was spared.  The historic carousel was then purchased by Jane Walenta and her husband who spent nearly three decades painstakingly restoring it and then installing it last year at the park. Now after withstanding the ravages of Sandy, the carousel has been nicknamed “The Little Carousel That Could,” symbolic of the resilience of New York.

John Seabrook in his article for The New Yorker explained the significance of the now symbolic image above:

“Few pictures of Hurricane Sandy captured both the enormity of the disaster and the unquenchable spirit buried deep in the city’s core better than the image of Jane’s Carousel, the glass-enclosed merry-go-round on the waterfront near the Brooklyn Bridge, taken at the height of the storm.  The photo shows the dark water lapping at the horses’ hooves, with the eerie blacked-out lower-Manhattan skyline in the background, and the festive riderless ponies twinkling merrily in the bright yellow light. Originally posted on Instagram and picked up by CNN, the picture was seen all around the world; at one point that night it was at the top of Twitter’s trends.”

Read more about The Carousel That Could.

Posted by Children's Focus at 3:18 PM No comments:

Sesame Street Hurricane Kit offers children and parents an opportunity to discuss children's fears about Sandy and other disasters.  "Hurricanes, storms, and other natural disasters can be difficult for young children who may not fully understand what's going on around them. These tips, activities, and videos can help them feel safe, cope with emotions, and understand that there is hope for the future." Check out their program at http://www.sesamestreet.org/parents/topicsandactivities/toolkits/hurricane

Posted by Children's Focus at 7:47 PM No comments: